Walking in Twilight. But not really! 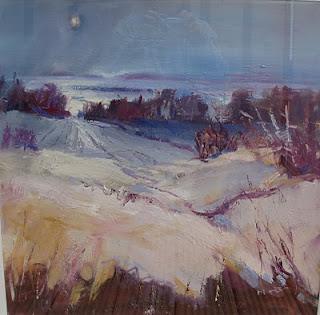 This week I took part in an exhibition in a small harbour town called Kirkcudbright, which was very popular in the early 20th century with many Scottish artists. It still retains its art connections with a good number of galleries and  I submitted 8 works to show. The photo shows me trying to hang the paintings - not easy to get them in line!!!
Walking in Twilight is one of the works - though photo not good! But, though its a place I often walk, I've actually never seen it in twilight.So its not plein air1  I've tried painting at that time  but found it hard to actually see the colours on my palette as the light faded. So I've used remembered colours to depict the moonlight and how it can "silver" everything. Its different from most of my paintings as its really based on greys and  I'd like to work in these shades again.
Sold
Posted by Bridget Hunter at 00:57