Inspired by Figs and Pears 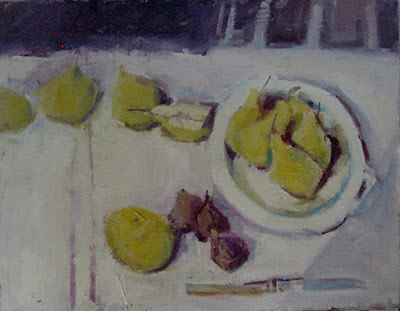 Still Life with Figs
Oil on Board  18 x 14"
Bridget Hunter 2012
Its been a while since I painted or blogged - blame it on lugging large garden pots around and damaging  nerves in the shoulder. I've read a lot instead !  And I've looked at Art Books. And I've been inspired by many images of paintings I've seen, especially a still life by Van Gogh.
So, I went to the supermarket and bought a pile of pears, a grapefruit or two and a few figs - because of the colours - and then attempted to make some kind of composition. I've ended up with 3 paintings
though two are still at the scraping out and repainting stage, which for me can last quite a while.
This is the smallest of the 3 and when it was nearly finished I added 2 mauve lines, indicative of a pattern on a cloth which I felt the almost circular movement in the painting needed. I also added some strokes of paint to represent a chair back. I'm hoping its now a finished work, though nothing nearly as wonderful as the Van Gogh work which I find so inspirational.
Just look at those onions !